A Project for Better Journalism chapter
The Bulldog Herald
Feature 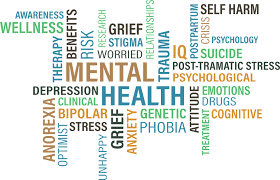 As human beings, our minds tend to be our greatest asset. We are complex and can express individuality only because of them. To some, however, the mind is an uncontrollable and unforgiving part of the body that causes significant suffering and inability to function in society as “normal” people.  Your teachers, classmates, and friends could be battling their brains daily and you may not even know it. Mental health issues are not only limited to official psychiatric diagnoses, people suffer from unknown and seemingly odd conditions daily. At Springdale High School alone, some students and teachers suffer from anxiety, OCD, Misophonia, and other conditions that we may not even know about.

OCD (Obsessive-compulsive disorder) is one of the many conditions that some of our peers are dealing with. It causes sufferers to have unwanted and repeated thoughts, feelings, ideas, sensations, and behaviors that drive them to do something over and over, inflicting great stress and anxiety upon those who have the disorder.

“it’s stressful and I can’t do anything about the compulsions,” said a Springdale student who requested to remain anonymous. “From little things like my handwriting being appealing to checking the oven after cooking at least five times to make sure it’s off.”

In school, compulsions are often major distractions in a sufferer’s life.

“It makes it harder to focus. Sometimes I redo assignments over and over again,” said the source. Having a condition like OCD in which your brain is constantly nagging and compelling you to do things is tiring and extremely stressful for those who deal with it every single day, especially in school.

Misophonia (literally defined as hatred of sound) is a mental condition that few know about and even fewer suffer with. The lives of people with Misophonia are tiring, stressful, and often lonely. The condition causes a severe fight-or-flight response within someone when certain sounds or visuals (triggers) are heard or seen. Common triggers for Misophonia sufferers are chewing, tapping, repetitive noises, sniffing, and loud noises, but they vary between sufferers.

“My worst triggers are probably gum chewing/popping, utensils/pencils scraping, whistling, eating sounds, and finger-nail clipping.” said Karen Daugherty, a teacher at SHS who suffers from Misophonia. “When I am triggered, my first instinct is to ask them to stop, but when that doesn’t work, I have to get away from the trigger or put headphones in and try to block out the noise.”

These sounds aren’t just simple annoyances for people with Misophonia; they cause panic attacks, anger, anxiety, and a need to stop the sound or leave the situation. It renders them incapable of focusing on anything other than the trigger sound, filling their minds with nothing other than the repetition of the same sounds over and over. In this day and age, triggers are inescapable, and it puts a lot of stress on those with Misophonia, making it difficult to be in social situations, go to work, or attend school.

“I don’t spend as much time as I would like to with my family and friends because of Misophonia.” said Daugherty. “Some days, having Misophonia makes it difficult to do my job, especially if students aren’t respectful of classroom expectations regarding food/drinks/noise in general.”

To those with Misophonia, everyday activities are difficult to get through without being triggered and having to leave the situation. It causes relationships with family, friends, and even meer acquaintances to become strained simply because it’s so difficult for those without Misophonia to truly grasp.

“When I tell them about Misophonia, their initial response is ‘oh I have pet peeves too.’” said Daugherty. “They think of it as more of an annoyance than a condition that you can’t control. What may be a simple sound to them is really painful for those with Misophonia, and that’s really hard for them to understand.”

Life with Misophonia is painful and often times extremely lonely for sufferers. It’s a very real condition that many overlook or don’t even know about, but those that have it are all too aware of it and all of the sounds that take control of their lives.

Anxiety is often discussed lightly among those that aren’t truly burdened with this non-stop, severe issue. There are many different types of anxiety disorders that fall under the umbrella of a single definition–a worry about the future events with fear as a reaction to current events. These feelings may cause physical symptoms such as a fast heart rate and shakiness. At SHS, there are multiple people who suffer from varying anxiety disorders that take control of their lives in and out of school. Even small things can trigger anxiety attacks in sufferers.

“Quite a few things give me anxiety,” one student said. “Sometimes multiple small things happening at once cause anxiety attacks and other times, it seems like nothing happens to bring it out.”

Often times, anxiety causes those who suffer with it to feel alone, as if they have no one to talk about it with. That thought, in itself, can trigger anxiety attacks.

“I don’t have many people to talk to about it. I have this fear that I’m overreacting and people will think that I am being too dramatic,” said the student. “I’m afraid that I will disappoint people and that I’m alone in this.”

For each individual person, anxiety attacks feel different, varying in severity and length. Common symptoms of anxiety attacks are sweating, trembling, shortness of breath, heart palpitations, feelings of choking, chills, dizziness, and pure fear. The attacks typically include at least four symptoms at once. Anxiety attacks can happen both in states of anxiousness and in states of calm.

“Every attack is different for me and different things can cause them to stop each time,” the student added. “Sometimes it helps to talk to someone. Other times, I just need to be alone, listen to music, and pray to make them go away.”

When attacks like these come without warning and sometimes without cause, it makes it increasingly difficult for sufferers to lead “normal” lives.

“Anxiety has been a major hindrance.” said the source. “It has kept me from joining many activities because I’m afraid that additional work would stress me out and cause even more attacks. I also think that I have lost friends and had my grades drop when stress became too high.” Anxiety disorders often cause sufferers to adjust their lives according to what works best for them in keeping attacks at bay, lowering opportunities and overall quality of life.