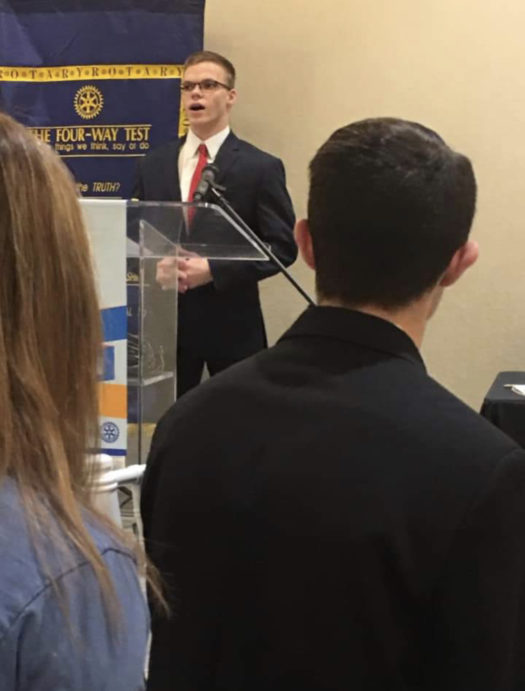 ▲
Dimitri Clark giving his speech during the club round

▲
Dimitri Clark giving his speech during the club round

In all four SHS students completed along with two Har-Ber High School students. All contestants were to pass a preliminary round held at a law firm in downtown Springdale in order to speak before the Rotary, the top three speakers were then selected to speak at the Apollo Theater the following Monday. Springdale dominated by taking two of the three spots in the preliminary round and then placing first and third place during the club round.

The Rotary Four Way speech test is designed to analyze the decisions ones made in the past or will make in the future, the speech follows a format that guides the audience with the speaker through the decision making process. The speaker must ask and answer four questions during their 4-7 minute speech: Is it the truth? Is it fair to all concerned? Will it build goodwill and better friendship? Is it beneficial to all concerned?

Debate students were asked to brainstorm potential speech topics by teacher, Melanie Thresher. Students still interested in speaking were later asked to compose and present a rough draft of their speech as a tryout. Four students were selected to compete, Clark landed the position of alternate.

“I decided to make a speech about my disability.” Clark explained. With the help of both Mrs. Thresher and English teacher, Diolanda Dye, Clark was able to claim victory just one week after returning to school from the break. “They all agreed that they saw where the message should go, but it needed to be said differently.”

The initial question was rephrased several times before finally reaching something that better fit the speech.

“I spent my winter break rewriting my speech.”

The week following his revisions, Clark spent memorizing his work and then continued to enhance his delivery by improving his execution of the speech when school was back in session. Through the Rotary Four Way speech test, Clark was able to express the conclusion he had come to.

“Should my disability define me? Obviously, the answer is no.”

“I wanted people to realize the certain circumstances you’re faced with are so small compared to yourself.” Given the circumstances he has endured, Clark feels like he was raised in a much better way. “My parents didn’t let me even have my disability as an option or and excuse.”

“I don’t know any other words to describe his speech but amazing… inspirational.” said Mrs. Thresher “He deserves to win district”

“I like that I got to be up in front of people to give a speech the had a really good message behind it.”

He is expected to compete at the district level tournament in which he has the chance to win an additional $1000 at first place. He must now record his speech and submit it within the next three weeks in order to be able to qualify for any place.

“To be in high school and to be able to do competitive speaking is a challenge, but it’s a challenge I like.”